My EU poppy gets a mention in this Spectator blog. I profoundly disagree with the author. War, and peace, are as political as it gets, and defending the EU as a peace project is not trivialising anything – quite the opposite. Hence my EU poppy. https://t.co/nuTOPks40L

This year, I made this little blue and yellow poppy and posted a photo of it on Twitter. I knew that this might prove controversial and also that some people might take offence. To them, I offer the following arguments:

Marking 11 November as Remembrance Day has a long international history. Many countries mark it. In Belgium, where I’ve lived for many years, it’s a public holiday. It does not ‘belong’ to the Royal British Legion nor to the UK, and I feel it has been appropriated in Britain by people who want to make it about the country’s current armed forces. That’s not what it is to me. To me, Remembrance Day is first and foremost about the awful horror, stupidity, and waste of the First World War. Then, by extension, it’s about the Second World War, and the way European civilisation turned in upon itself in fratricidal conflict. That’s what Remembrance Day is to me, and while I respect other people’s wish to make it about something else, something more than that, or something less than that, I reject their wish to impose their interpretation on me and everyone else. My understanding and experience of Remembrance Day is as valid as and arguably historically more valid than theirs.

Those who serve in the military are public servants who make great sacrifices for their fellow citizens. In the modern era, they are volunteers, so they have chosen this path knowing that it might entail great sacrifice. However you feel about the state’s use of arms to achieve its objectives, I think this choice by individuals is worthy of respect, and I do respect it. Respect that is forced isn’t really respect, though, is it? So-called “poppy fascism” (by which we mean pressure to conform in wearing a poppy) is, I think, fundamentally disrespectful. It’s disrespectful to people who serve in the armed forces because it poisons public debate around their service; it’s disrespectful to those who so pointlessly gave their lives in the First World War; it’s disrespectful to those who gave their lives in the Second World War to fight *actual* fascists, and defend our fundamental freedoms; and it’s disrespectful to all the other public servants who make sacrifices on a daily basis, even if those sacrifices are (thankfully) rarely mortal.

Given my personal views set out in the previous two paragraphs, it can hardly come as a surprise that my understanding of Remembrance Day is intimately bound up with my passionate belief in the European Union. To me, the EU flag is a far more potent symbol of Remembrance than a poppy. To me, Brexit is an offensive act of disrespect for the sacrifice of millions in past European wars. As soon as the idea occurred to me, I felt I had to make this EU poppy and show people that I had made it. This is the very opposite of trivialising Remembrance Day. Brexit trivialises Remembrance Day. And to the author of the Spectator piece who feels that talking about Brexit politicises Remembrance Day, I can only say that Remembrance Day is and always has been profoundly political, and his article only serves to prove that.

Is anyone doing EU flag poppies? That should be a thing. https://t.co/ACU4rNcSA8

So @SE25A got me thinking, why not just make my own? Half an hour later… pic.twitter.com/9TXZyBv4Ji

Still working on my crochet #EUpoppies – this one’s an improvement I think! pic.twitter.com/DF85oENpOh 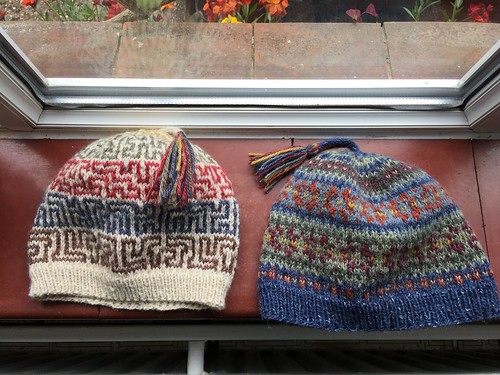 Calling all members of the Bresistance! Show your love for Europe with this unisex fairisle euroberet! May be worn Citizen Smith-style, Che Guevara-style, or René-off-of-Allo-Allo-style – however you wear it, it’s guaranteed to troll a kipper.

Disclaimer: this is my first attempt to write up a pattern, and it won’t lead you by the nose. I am assuming some experience with stranded colourwork and basic increasing/decreasing on the part of the reader, and that you will be comfortable adapting the pattern on the fly to suit your needs and address any errors. My beret (pictured at top and below) was improvised, and so is this pattern. If you don’t recognise an abbreviation, you probably won’t want to knit this pattern (but if you’re curious please search them on youtube where there are hundreds of great tutorials).

The beauty of a beret, knit from the top down, is that you don’t have to be too fussy about sizing. The only bit you have to get right is the very final four rows of ribbing which have to fit the head you’re knitting for. If you get to the end of the pattern and you find you’re still a bit too big, just add another decrease round or two.

The beret is knit in the round from the top down (beginning with an i-cord). Start using DPNs and transfer to circular needles as appropriate (once I’d complete the i-cord I transferred to a single set of long circular needles and used the magic loop method throughout). At the top and the bottom of the star section, there are long floats of up to 15 stitches, I recommend trapping the floating yarn every five stitches using a twist. Be careful to avoid making your floats too tight or the fabric will pucker.

3. Arrange stitches evenly on 3 DPNs (2 stitches on each) or transfer to long 3.5mm circular needles (to knit in the round using the magic loop method). Next row is Row 1.

6. Now, knit rows 3-50 following the pattern with row 3 at the top (click on the thumbnail below). Each row in the pattern is repeated twelve times to complete a single round. SM (slip your marker) at the end of each round. At its maximum breadth, you will have 192 stitches per row.

On increase rows, M marks the increase. Use any increase you like – I used kfb, m1l and m1r. For the decrease rows, a backslash / marks decrease stitches (I used k2tog).

Chances are your head is smaller than mine, in which case you might want to repeat row 50 once or even twice until you arrive at a size that fits you more comfortably.

8. Cast off in rib using an elastic bind-off (eg http://slipslipknit.com/?page_id=92). Weave in ends.