(Update, December 2015: this post generated considerable interest and led to an article in the Spectator in which I am referenced. The latest news is that The Glad has achieved status as an Asset of Community Value and the developer’s appeal against this was refused; but, unfortunately, so was the Walworth Society’s application to list the building. However Southwark Council are creating a new ‘Liberty of the Mint’ conservation area which will include The Glad, and this should give the pub further protection from demolition. Thanks to all who continue to show support!)

A few weeks ago, members of my extended family gathered in the Gladstone, a pub on Lant Street in Borough, just south of London Bridge, to celebrate the launch of my cousin Helen’s new book. The choice of venue was deliberate: the book opens with an imagined meeting between my great-grandmother, who lived on Lant Street, and my great-grandfather, a brewer, who we think worked in the brewery opposite the Gladstone and perhaps in the Gladstone itself. The pub was said to have been renamed after the Prime Minister who, family legend has it, regularly tipped my great-great-grandfather a gold sovereign for driving him to Parliament in his hackney cab. Gold sovereign or not, my great-great-grandfather’s business failed and he died in a poorhouse. The family moved out of Lant Street, and our connection to that part of London withered.

Today, the Gladstone is a successful local watering hole, catering to the young professionals and creatives who populate that part of London now, and regularly staging live music. Each time I’ve been there it has been packed to the rafters. But the landlord is glum, despite his thriving business. Why? Because, like many London pubs, the Gladstone’s future is uncertain. It is owned by a faceless holding company based in the Isle of Man, one imagines for tax reasons, and they have applied to Southwark Council for permission to demolish the pub and replace it with luxury apartments.

Just up the road, London’s most celebrated gay pub, the Royal Vauxhall Tavern, stares a similar fate in the face. The RVT, as it’s known, is a hugely popular and historic venue for London’s gay community. But it was recently sold to Austrian property developers who will not guarantee its future.

So the Gladstone and the RVT may join over 3,700 other London pubs which have been lost to the local community in recent years. Each one of these pubs will have meant something special to a local person or a local community, just as the Gladstone and the RVT mean something special to my family and my friends. Not every local pub is a viable business, and some closures are inevitable, but there is something more sinister going on here.

The companies which have bought these pubs have no interest in making them work as a business. They are only interested in their assets. Which, in the case of London pubs, is not their clientele, nor their stock, nor their turnover, nor their brass fittings. It is their physical footprint. London’s frenzied property market is badly broken and out of control. If you’re rich, then it will make you richer. London property is the new Swiss bank account. If you have London property to sell, then you stand to make a mint. And if you have a plot on which you can erect a few luxury apartments, then it’s jackpot rollover time. Why slave away for slim pickings in the pub trade selling low margin beer and food when you can instantly quadruple your money as a property developer? As a capitalist, it’s a no brainer.

Which is why we have planning laws. Politicians have a responsibility to ensure that our neighbourhoods and communities are managed in a way which benefits the community as a whole. They are supposed to protect valuable local services from predators who value them only for the price their stripped carcasses will fetch. Somewhere, those responsible for governing London seem to have lost sight of this. Property is treated as a commodity with little intrinsic value beyond what it will fetch on the open market. Regulations are weakened, or abandoned entirely; the very word regulation is used as an insult. Is it any surprise that some developers think they are above the law?

The Carlton Tavern in Maida Vale

We have some good local politicians, and local MPs. But the Mayor of London, and central government, have actively encouraged a culture of free market anarchy in London and this is celebrated by greedy groups and individuals who can’t see beyond their own winnings. Meanwhile, local communities are dying. People on average incomes can no longer afford to live in the inner city. Londoners’ quality of life is dropping as they are forced to spend more and more of their wages on accommodation and on transport. Local services, including pubs and shops, are priced out of existence. 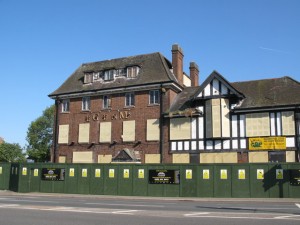 Pubs have a unique place in British, and London, culture. They are a resource for the entire community. They create local jobs. Their value extends far beyond the pounds and pence that developers stand to gain by using their footprint to expand London’s ever-more-insane property bubble. We can fight to save the Gladstone and the RVT, and perhaps we will win. But it’s already too late for thousands of other London pubs, and individual victories alone will not win back a London that’s fit for Londoners.

Remember this when it comes to our chance to elect a successor to Boris Johnson on 5 May next year. And in the meantime stay vigilant and watch your local authorities. They have a legal obligation to consult the public and respect neighbourhood plans when considering planning applications.

Lobby Southwark Council to save the Gladstone here. Join the campaign to save the RVT here.

19 thoughts on “London is broken”